Here it is already the 13th day of the year 2010!  I suppose it’s a little late to make New Year’s resolutions, but as I looked at our blog and realized how long it’s been since I’ve written any post at all, well, I think I can sneak in a late-breaking one!

There are always so many things to do, and time seems to play Houdini regularly.  I always say that if I won the lottery and didn’t have to work another day, I’d be plenty busy with things I want to do.  So many interests and so many options.  Kick the voice-over business into gear.  Get some regular exercise.  Set up a house-cleaning routine and try to win the dust battle.  Get out my camera again.  Finish the trim on the hardwood floors.  Replace the doors.  Go flying.  Some people would be motivated by a long list of things to do.  I get overwhelmed!  I can’t help it.  I have just enough of an obsessive-compulsion to start 1,000,000 new things, but plenty of ADD to keep me from finishing any of it!

But there is one project I did both start and finish in the same weekend!  For quite some time now, I’ve been complaining about our laundry/utility tub.  It’s kind of gunky and the faucet was getting so corroded that for quite some time I’ve been unable to turn on the Hot water at all.  So just like with the year only one week prior, it was time for out with the old, in with the new!

I have to say it went relatively well.  I thank my parents, uncles, grandparents, etc. for raising me to be somewhat handy. (No…not handsy 😉 )  The vanity kit came complete with sink and plumbing parts from Lowes.  I only needed two compression shut-off valves and one drain pipe coupler and I was in business!  Sometime over a delightful beverage I can fill you in on the adventure of trying to get it home in my BMW, or the acrobatics involved in trying to cut a hot water pipe that was still somewhat pressurized (remember, I couldn’t open the faucet valve…), or of the battle between [sink] legs and [my] toes.  But for now I’ll just post the Before & After photos.

Forgot to take the photo before I started the project.  So here’s the old sink, legs and faucet inside:

And a closeup of the old faucet…yuck! 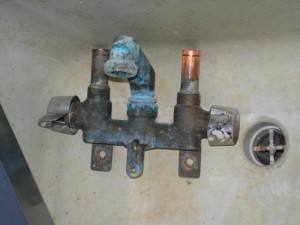 And finally, the new vanity and faucet: 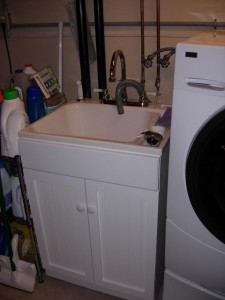 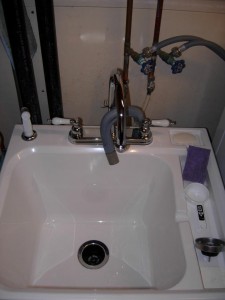